Koh Tao was my first a fe

w island stops in Southeast Asia. This island is famous for it's diving. Not just because the diving is good, but because it's also really cheap. It is especially cheap if you want to complete some courses, which is exactly what I did.

Getting to Koh Tao involved an overnight bus from Bangkok that stopped at the ferry pier at 2am. This was a little annoying due to the fact the ferry doesn't arrive until 7am. Luckily there was a little area set up to chill/sleep in (mats on the ground) and I just curled up and passed out. I was so tired in fact someone had to wake me to tell me my ferry had arrived. Once on the ferry, I immediately fell to sleep again.

When the ferry arrived I met up with one of the hawkers selling diving schools and found a sweet deal that was 9000Baht ($300Aus) for my PADI open water Cet. This also included accommodation and a free fun dive at the end of the course. They gave me a ride over to my Bungalow and after a couple of hours I began my "theory lessons" for the course. There was meant to be 4 people doing the course with me but only 1 girl showed up, so it was just us two. This was nice because the classes are much simpler and quicker when there are just a couple of you.
That night, I went out to the beach and got stuck into the cheap BBQ that the restaurants provide on the beach (this

would end up being a bit of a daily ritual). I also met up with some folk that I met on the bus on the way to the ferry. We chilled at one of the beach bars and watched the cool Thai Fire dancers. This was pretty much my only night out in Koh Tao (my only late night that is) as every other morning I had to begin diving lesson nice and early. I slept well that night. In fact it was the first time I'd been in a bed for about 3 days because I'd been taking all those damn overnight buses!
The next day of diving school involved a few more cheesy American diving videos and then a bit a pool practice diving. It was exciting to finally get under water and start using all the equipment and stuff. 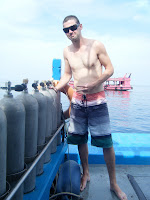 The third day was the first day of diving. We still had to do a few skills when we were under water and stuff, but for the most part swam around and got the feel of being submerged. It was pretty cool! Didn't see anything really amazing though... Just tons of fish and lots of coral.
The last day of the course was pretty sweet! We didn't have many skills to do, just pretty much dived. We went far out to Chompon where there are meant to be lots of sharks (even Whalesharks), so I was hoping to see something cool. once again, there were no sharks :( there were some l

arge schools of Barracudas though which was pretty awesome.
On the fifth and last day, I did just one dive (my free fun dive). This was one of my best! I finally saw a shark, though it was not very big and I also got see a lot of trigger fish, though they didn't want to play (they usually like bit divers fins and stuff).
Overall I really enjoyed Koh Tao. The diving was awesome and the island was really chill and nice. I now have another really expensive hobby though. I wish completing an open water course meant that dives become cheaper, but they really don't. But it so much damn fun! So, I know I'll keep doing it not matter how much it hurts my bank.
Posted by clarkysk8 at 2:17 AM