After, Siem Reap I actually headed over to Bangkok for the night but I'll be there again in a bit so I will wait for my 2nd visit before I blog that chapter.

Anyway, so I caught a sleeper train from Bangkok all the way to the Laos border. The train was an incredibly bumpy experience; not nearly as comfortable as the trains in China, but it got me there none the less. At the border I had to go threw all the proceedings of making my way into Vientiane, which pretty much included a couple of Tuk Tuks and a bit of negotiating. Once I arrived in Vientiane, I immediately found a local bus that would take me all the way to Vang Vieng. The local bus was pretty crazy! A lot of Laos folk packed onto it, along with a few token westerners. Plus they also seemed to be able to pack the bus full of all other sorts of things such as groceries, luggage and household appliances... It was full!

After a 4 hour bumping and uncomfortable ride I arrived in Vang Vieng. I wandered off to the main street where I found Joey and Skye who were having a bit of lunch. We w

alked around in search of a cheap guest house, which took a lot longer then I anticipated. Eventually I found a hostel for the night, but could only stay there one night as they were going to be full the next. Once I had dropped of my bags I set off to explore the town. 30 minutes later I'd seen the whole place... Yeah, it's pretty small! But there is a lot going on and the excitement is on the outskirts, not in the town. That night I met up with Graham and Kevin again and we all went out for some drinks.

On the 2nd day; Joey, Skye and myself rented some scooters and headed out of the town. We ended up finding some cool caves and a sweet blue lagoon where we did a bunch of swimming and jum 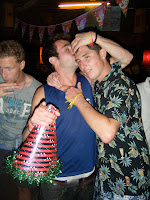 ping off stuff. We also hiked up a nice peak where we grabbed some amazing views looking out over the nearby rice fields. Some local kids followed us up the mountain, which was kinda cool... Not sure if they were expecting us to give them money, but we gave them a bunch of other stuff, like snacks instead. They were good fun! That night we stayed out a bit later then we had planned and the night ended at about 3am. it also ended with me losing my room key which sucked! I spent a bit of time looking for it but eventually gave up and woke up my guest house owners and got them to let me in. I was pretty annoyed about losing my key though, I blame the sketchy pockets in my fisherman's pants! Comfy pants... Crappy safe house for valuables!

The next day was new years eve so a whole lot of us went tubing, which is really what Vang Vieng is famous for. It's not really the tubing that is the exciting part, it's the craziness th 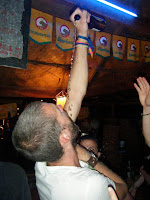 at happens along the banks of the river that is exciting.
Once we arrived at the drop point we were met by a hundred other fellow tubers who were all drinking and dancing at the bamboo bar next to the river. This is the first bar... There are several more though all within about 10m tubing distance of each other. Each bar hands out free 'Lao Lao' (it's free because it sucks!) and all the bars were serving up their own slice of creative, irresponsible madness. The first bar has a zip-line that would come to a sudden stop, instantly propelling the person who is attached to the line (this one was quite entertaining to watch). Another bar had a mud volleyball court, which was more of a mud fight then it was a game. With all this going on, sometimes you forget that you still have to tube down the river.

Eventually, we grew tired of all the partying (not really, it was just that it was getting late and we had to have the tubes back by 6pm) and we headed down the river. The river has a natural and constant current, though being the dry season this current was a little slow and we were getting a little annoyed at how long it was taking us to get back into town. After a while we were starting to feel a cold, so we decided to hop out and hitch a Tuk Tuk back to the tubing shop. We arrived just in time! 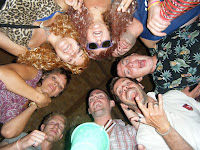 Well the details of the rest of new years are all a little fuzzy. I think that those stories are best saved for first hand explanation, which will involve me saying things like "I think this is what happened... But i'm not sure." And the day after involved me switching between cafes (which play either 'Family Guy' or 'Friends' on TV) and sleeping on there really comfortable cushions and mats.
Posted by clarkysk8 at 1:37 AM