Now that my time in Laos was coming to an end, I purchased a ticket over to Chiang Mai in the North of Thailand. Geographically, this city is very close to Luang Prabang... but in reality the two cities are divided by crappy roads, and an out of the way border crossing and a long transit time after the border crossing.

n my journey to Chiang Mai I took a night bus from Luang Prabang to the Thai border. This trip took a really long time! 12 hours to be exact! Plus I reckon we traveled on the windiest and bumpiest road in Southeast Asia. Not even 10mg of Valium could get me through the trip (this dosage has worked well on previous long bus trips). I did meet up with Marco (a Croatian guy that I met in Vang Vieng) on the bus, which was cool and provided a bit of conversation for good portion of the trip. Plus, in case the current bus circumstances were not bad enough they were worsened by the fact the temperature dropped incredibly low (I was wearing shorts and t-shirt) and my stomach was feeling a little ill. Anyway, enough complaining...

We got to the border early in the morning and once we got our exit stamp we had to catch a long tail boat across the Mekong over to the Thai border. After all the usual Immigration/Customs crap was completed, I had to wait about 2 hours for a minivan to take me over to Chiang Mai. Well... Late in the afternoon, I arrived in Chiang Mai!!

My first impressions of Chiang Mai are blurred by the fact that I was incredibly tired at the time of arrival. It did seem like it was a happening place though. Lots of people (foreign and Thai) and nice little restaurants and cafes. I did manage to head over to the 'Night Bizarre' to see what the fuss was all about. It was pretty much just a night market filled with the same stuff you find allover Thailand (funny t-shirts, lanterns and jewelery). The was a bit of "Bizarre" there though, this was the elephant I saw walking in to bars and the lady-boys yelling out 'handsome boy' from across the street to all passersbys.

On my first full day in "the Chiang" I took an all day cooking class, which w 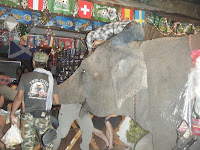 as high on my list of priorities due to the fact that I love Thai food. The class was relatively cheap compared to the amount of food that I was fed. Myself and the rest of the class had to choice a bunch of things that we wanted to cook and after the usual "trip to the market" we all spent time learning how to create Thai masterpieces. I was surprised at how simple most of the things were to make, though the biggest challenge that presents itself to me is being able to recreate them with limited access to Thai style ingredients.

On the 2nd day I rented a scooter to drive up to Doi Suthep which was about 16km out of town... Not a far trip, but this was made difficult by the bendy and steep road that I had to ride up and oh... did I mention that it was Raining!! not just raining, but pouring!! I wasn't when I left town though - just a slight drizzle, but as I was about halfway it really started to piss down! I powered on though, my main concerns being staying on the road and if my camera was getting wet in my backpack!

Once I arrived at the top of Doi Suthep, I was surprised at how many people were already there wandering around and checking out the temple. Surprised because I think I only was about 2 other cars on my way up to the top of the hill. Anyway, I walked around for a bit and saw the temple/Wat, but was bummed not to be able to see the view over Chiang Mai. As I was up there though the rain really picked up and I was forced to abandon my decent plans and sit and wait the rain out. I was on a bit of a time schedule though as I had to catch a bus to Bangkok later in the arvo and I was worried that I would have to just suck up the weather and gun it back to town. Luckily the weather subsided and I was able to make it down and back to town safely while staying pretty dry.
Posted by clarkysk8 at 12:20 AM