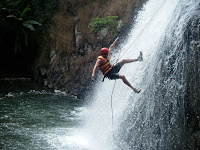 So, those that have been checking out my pics on Facebook would have noticed some sweet abseiling/canyoning pics of me and others. Well Dalat was where that all happened!

After a late night for my birthday, I headed (with a few of the same previous people) to Dalat which is in the South of Vietnam, high in the mountains. The trip there was a mixture of rough, bumpy, hot, long and all of that was made much worse due to the fact I was nursing a bit of a hangover! But once we arrived we were welcomed with some cool fresh mountain air. The town itself is rather small and pretty chill. A lot of folks from Saigon like to holiday here to escape the craziness of the city and it's definitely a lot more relaxed than Saigon. 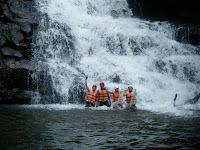 The day after we all arrived, we got up early and went on our canyoning trip. I was pretty pumped because I had received tips earlier that this was "the thing" to do in Dalat, even in Vietnam!

The whole thing was really fun! I could go into detail, but I feel I can some it up better with words like crazy, wet, slippery, exciting, exhilarating, strange and bloody sweet! Plus... I'll just let the pictures do the talking.
Posted by clarkysk8 at 6:48 AM