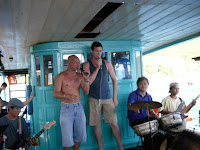 While heading south in Vietnam it occurred to me that my birthday was fast approaching and I decided that I wanted to spend it someone chill but fun and to make sure I wasn't doing any traveling on that day. So I headed to the beach town of Nha Trang which is on the South East coast of Vietnam. I headed there with Lyndsay and Dom who I had been with in Hoi an. We ended staying at the town's only hostel, which was where we met lots of other cool travelers and found people to hang out with during the day and at night.
The town has a really pretty beach and I pretty much spent most of my time hanging out/sleeping on it! At night we spent our time hoping around the many bars the town had and tried to find the best happy hour deals. We had some good times at these places and they definitely kept me out later than I always planned. 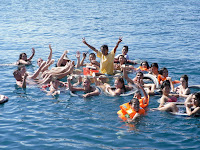 For my birthday I managed to find a good crew of people to join me on a boat tour of the local islands. The tour was quite cheap but a lot of fun! It began very early, which was tough because we all stayed out late the night before, but after a bit of swimming we all felt fine and we powered through! The guys running the boat tour were a lot of fun and they made sure everyone on the boat had a good time too. They even managed to remember nearly everyone's name... An impressive feet considering there were about 40-50 people on the boat. During the trip the crew served a kick-arse lunch which was followed with a musical performance. The performance consisted of the crew playing songs from everyone's home country and one person from that country would have to come up and sing. Naturally because it was my b'day I was roped into singing (waltzing Matilda... Of course!) and while everyone else sung happy birthday I had to shotgun a beer... No Worries!! After the eating, singing, dancing and stupidity we all jumped into the water for a swim. In the water they had a "floating bar" which was a large metal ring with a little Vietnamese guy sitting inside. The little Vietnamese guys was serving a fruit cocktail drink which he poured into small plastic cups for us. It was really chill and plenty of fun! After about an hour of floating bar madness we all piled back into the boat and headed back to shore. The night definitely continued on, but the details are all a little blurry... Sorry! It was my birthday! You understand, don't you??
Posted by clarkysk8 at 3:15 AM