You can't go to Cambodia without visiting Siem Reap and Angkor Wat now can you! Well, you probably could... Well, I mean you definitely could... But that would just be stupid now wouldn't it! I mean come on! Unless you have seen the temples before or you are in Cambodia for specific reasons then you really HAVE to go see Angkor Wat and all his little buddies too.

So... Anyway, I ended up taking a 12 hour overnight bus from Sihanoukville to Siem Reap, which thanks to my good friend Valium, was actually quite comfortable, quick and painless. So when I arrived early in the morning I was met once again with usual Tuk Tuk pushers who for once were actually happy to take me to where I wanted to go rather than trying to sell me an alternate guest house. I ended up staying at 'Garden Village' guest house, which was cheap and had a pretty chill group of backpackers hanging about.

Well, rather than wasting a day sleeping and being tired and boring, I decided to take on some of the temples. I found a moto dude to take me to some of the temples that were a little further away and I made plans to cycle to the closer ones the next day. I was pretty shocked/bummed when I was hit with the entry fee though... $20 a day! Yeah I know right! Oh well, like I said... Angkor Wat really can't be missed. So, I can't remember the name of the first temple I saw.. But it was freakin' sweet! I was totally impressed! I spent about 3-4 hours exploring round about 6 temples on the outer track and every single one of them blew my mind! I was stoked too because these were only the smaller temples, I still had the big ones to see the next day. 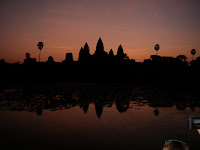 The next day I woke up really early (4:30) to cycle out to the temples to watch the sunrise over Angkor Wat. Oh.. And did I mention that it was Christmas day! Well, cycling to the temples is not too far, but when it's pitch black and no one about then it's a little difficult to get about. I recon that I was only passed by about 2 or 3 Tuk Tuks the whole way, this lead me to believe that I may have been one of the few people that rose early for the sunrise. Haha! What a fool I was! When I walked through the gates of Angkor Wat I was greeted by a few thousand people that had set their alarm clocks for the same time as 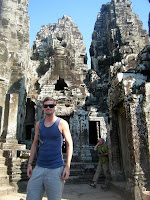 myself. Everyone was trying to get that nice shot of the temple reflecting on the pond too. The sunrise was amazing though! It was well worth the early rise. So after a little exploring around I moved onto Bayon temple which is quite famous as well. This was one of my favourite as it is very unique with the faces on all the towers and the shear size and detail of it is very impressive. I also went to the temple that was made famous by 'Tomb Raider,' it too was very impressive! However, it was made a little frustrating by the hoards of tour groups that were pushing their way through the already confined spaces.

Christmas night was a good time! Garden Village was holding a Christmas party which consisted of cheap food and lots of beer. There were quite a few people about too. I met a couple called Joey and Skye (who I would end up seeing in many other places), they were from Canada and were traveling for a while. I also met two guys named Grahame and Keven who I had met previously in Nah Trang. The night was fun but relatively uneventful, which I guess is sometimes a good thing. 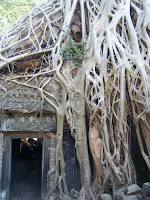 Before leaving the next day I met a Korean guy that was cycling around the world. He was giving himself 5 years to do it and he'd only been going for about 3 months. He was a really col guy! He was also living off only $5 a day. Cool huh! If you want to check out his site then here's the link http://phototour.tistory.com/ most of it is in Korean, but you can use Google translator on his site.
Posted by clarkysk8 at 3:13 AM