No Moon party in Koh Phangan

If you haven't heard of Koh Phangan you have more than likely heard of the "full moon Party." Well, this is the place where it all happens! though I wasn't there for the party I was there for a bit of the fun and festivities.

When I arrived, I met up with a Swedish couple that offered to share a room over at Hat Rin. We agreed to share mainly because there was only one room left at the place we had found. It worked out well though, the room was large and we all saved a bit of cash!
Later after we had checked in I discovered that my roommates were quite young. 21 and 18 to be exact. Not that there is anything wrong with that. It was just that they started to make me feel really old. Plus they were one of thousands of Swedish that were inv 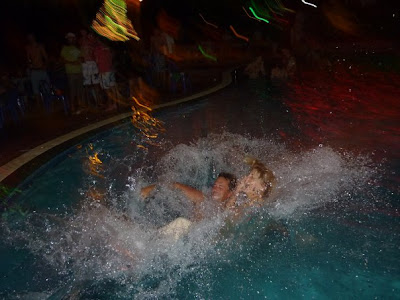 ading Thailand. Seriously! Travel through Thailand and Malaysia for a while and see if you can go a day without meeting some people from Sweden. I dare you!
Well, the first night was probably the most exciting. We went over to Hat Rin Nok, The place where the "Full moon party" takes place. There was definitely no party tonight though. In fact it took a lot of searching to find a place that had people about! The whole place was certainly set up to accommodate a large party though, with stands selling buckets of all kinds alcoholic crap and they are using all kinds of methods to attract attention (dirty catch phrases, yelling and whistling etc). We ended up stopping at 'Cactus bar' which is quite a famous place in Hat Rin and that was the bar that had the most people. I also met up with some French friends that I had met on my bus from Chiang Mai to Bangkok.
Anyway, the bar managed to fill up a bit; so the night was not as boring as I had earlier predicted. They served up a bit of fire frantics, such as 'fire limbo,' as well as the always popular 'balloon on the ankle' game.
well it turns out the room that I was sleeping in held the light of day out very well, because I ended up sleeping into about 1pm. This was not a totally let down though, because I did wake up to torrential rain and was forced to st 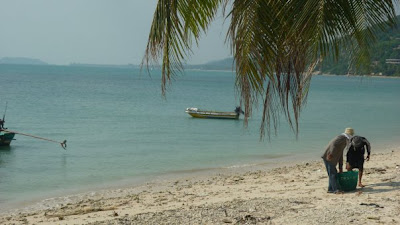 ay inside for most of the day anyway.
That night, our resort was hosting a 'pool party' which was heavily publicised all over the island. The night was not quite as exciting as we had predicted, though it was still plenty of fun! It was pretty much just me, the Swedish couple and my French friends hanging out. We did end up having quite a fun night though, which didn't finish to early in the morning.
Well this is pretty much all that happened in Koh Phangan. There was a 'black moon' party on the last night I was there, but I skipped that due to concerns about my 6am departure the next morning.
Posted by clarkysk8 at 10:53 PM