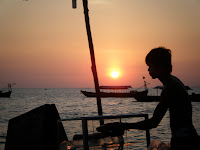 After one night in Phnom Penh I decided I'd had enough of cities, so I hopped on a bus and headed to Sihanoukville which is on the coast of Cambodia only about 4 hours from Phnom Penh. I got there at about midday which was nice because I still had the whole day to relax on the beach and stuff! It turns out that was all I really did for 3 days... Relax on the beach! It was nice though. Not too crowded, not too expensive, the water was warm and the days were bright and sunny. I was a little irritated with all the kids and woman that would patrol the beach trying to sell you everything and anything! Some of the kids were crafty and clever too, but giving them money doesn't really help anyone because all they are doing is giving back to someone older. Plus buying things from kids in the middle of the day also teaches them that they don't need to go to school and that they can just hassle foreigners on the beach for the rest of their lives.
One of my favourite things to do at night in Sihanoukville was to go to the BBQs that they would have on the beach. This is where they have fresh seafood on display and char it up for you for really cheap prices! I mean really cheap... Like $3 for a whole snapper... Oh yeah!
But beside cheap food, a lot of relaxing, swimming and sleeping I really didn't achieve much else during my time in beach town. But I have no regrets! I was nice to finally get to chill for a bit.
Posted by clarkysk8 at 7:34 PM