Can I borrow your Phnom Penh? 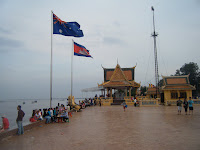 After a not so long bus ride and pretty simple border crossing, I made it to Cambodia and arrived in Phnom Penh early afternoon. I travelled with Lars, who is a Dutch dude I'd been traveling with for about a week. We both found a cheap hostel, dumped our stuff and ventured off into the city. We were there on a Sunday, so it seemed that a lot of people were out and about! However the place didn't really feel overcrowded (not like Saigon). 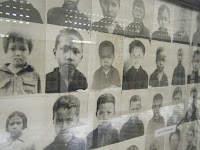 The only thing that we really wanted to do on the day was visit the old Khumer Rouge prison that was in the centre of town. The prison is not as famous as the the Killing fields, but it holds a similar representation and was the site where thousands of people were killed by the Rouge. The first shocking thing about the prison is that it is housed in a primary school, so all the classrooms were turned into cells and they hung wire and fences all over the place. The place was very creepy and quite sad, the saddest part was seeing the faces of the people that were executed there, as they had their photos hung all over the place. 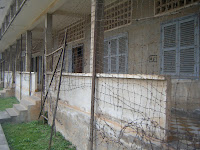 r a bit of a somber afternoon we headed over near the palace to check out the river and see what was going on. Over there it seemed like half the city was out and about, having a good time! They were all playing badminton, or hacky-sack or just running around with friends and family enjoying themselves. It was a complete contrast to what we had previously just seen. It was also very different to Vietnam in that it always seemed like the Vietnamese were working and never enjoying themselves, so it was quite refreshing to see some change! Especially in a place that was supposed to be a whole lot poorer.

Speaking of poverty though, I did happen to notice an unusual amount of really nice cars driving around Phnom Penh! Seriously! They were everywhere!! Lexus, Mercedes, 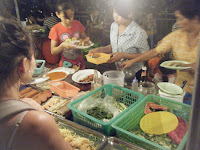 BMW, even Hummers! It was really surprising! But later we got talking to a local expat about it all and he says that most of the cars belong to non-government organisations such as different charities. I hope that this is not true! You would hate to think that charitable companies were sending money to Cambodia to fund these dude's rides! But don't let that turn you off giving money! I'm sure that most non-government organisations are legit! Just try and be sure who you are giving money to!
Posted by clarkysk8 at 6:00 PM