What's the capital of Thailand? Bang....? 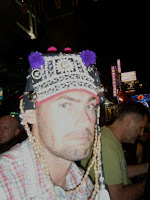 So the reason I went to Bangkok in the first place was because it was much quicker to head there before going to Laos then trying to get to Laos from Siam Reap. This is because Thailand's transportation system is much more organised and efficient.
So after a bumpy ride to the Thai border from Siam Reap, I spent about an hour or so trying to get into Thailand. Not because I was having visa problems, but because there were about 200 other people traveling through the same crossing at the same time. When I eventually got through and across I was pleased to see the smooth sexy 2 laned freeway that the rest of Southeast Asia had been lacking. This made our trip to Bangkok smooth and easy.
The bus dropped us all off at Koh San Rd, which is the main backpacker hub in Bangkok. I didn't have much trouble finding cheap accommodation and I met another backpacker that was keen to split a room to save cash. Also when I arrived in Bangkok I met Graham and Kevin again and they were staying just a 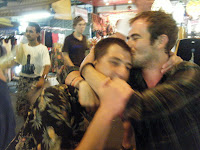 round the corner from me. So I ended up hanging out with those 2 as well as some other folk and we spent the night drinking on Koh San Rd. The night went by pretty quick and I remember it being quite fun, though I assure you it was an uneventful night... No "Ping Pong" shows and no strange stories involving Ladyboys. though, I did do to bed before Graham and Keven... So maybe they have some interesting stories... Who knows?!
Anyway, even though I thought I had a relatively tame night; I still woke up with a mean hang over. I didn't let this effect my day too much though. I managed to get out on the local buses and get over to the main part of town, where I was attempting to fix my camera (for some reason it's been taking sketchy shots). I also managed to get over to one of the malls and pick up a new lens for my camera too (i've been using the same crappy lens for about 3 years now). Plus I completed all my transportation using Public transport (no Tuk Tuks), which was cheap and rewarding!
Well after a day in Bangkok, I headed out on an overnight sleeper train to Vientiane. This train was not as comfortable and as well organised as the ones in China, but it was still comfortable and got me to my destination (even if I did think I was going to get tossed out of bed all night).

So... Now onto my 2nd time in Bangkok. The journey here first begins with a rough overnight trip from Chiang Mai. Well, maybe rough is the wrong word... Wet is a better one!
So, if you read my last post you would know that Thailand was receiving some rain. Well, the bus we were taking was a little old and not really water-tight and it seemed to be leaking water everywhere! Luckily the bus was half empty (or half full depending on your religion) and a lot of us moved about the bus looking for a seat that was going to keep us dry. I managed to rig up a little shelter by jamming the curtains over the leaking spots a

nd that seemed to keep me dry for the most part. but after a while, I fell to asleep and didn't even notice that the bus was sinking!
I wasn't actually staying in Bangkok this time, just merely hanging out for the day and waiting for a bus to take me south. I arrived in Bangkok at 5am however and still had to wait until 6pm for my bus. I hung with some French guys that were on my bus for a bit and they were doing a similar trip. We were forced to hang at this Israely cafe, which is where the bus drops you and picks you up (and as you know, I do like my food Kosher).
So, this stop in Bangkok was a lot different from my previous stop in Bangkok. This time I ventured out camera in hand and played the tourist game. My first stop was the museum. I'm usually not really into museums and never really have been, but this one was di

fferent... NA!! Just kidding... It sucked! It was pretty much the same as every other history museum. Though mildly interesting, it was still full of the same pots and bowls that every museum has. Sorry to be so negative, but I guess I'm just not really into this kind of thing! It's funny because as an adult I thought I would begin to enjoy the things that I had found boring as a child. But no! Most museums are boring and Church sermons are still fall into a similar category. Don't get me wrong, I have been to the odd museum or two that I have enjoyed and Art Galleries are in a totally different category (love those). It just seems though, if a country in Asia has a whole lot of old crap lying around then they are going to open a museum to display it and rip tourist off at the same time.
Well after that I headed over to the palace but back out after I saw the price! So instead I walked over to see the lazy reclining Buddha. This was pretty impressive! He was huge and really really gold!

My next plan was to head over to the large market that was on the outskirts of town but after a bit of miss-communication I ended up in Chinatown. this was a pretty crazy place... Very different from the rest of Thailand. didn't spend much time there though. I headed back to Koh San Rd and did a little bit of shopping.
Well that's pretty much it. Bangkok done!!
Posted by clarkysk8 at 2:00 AM