Are you feeling Krabi?? 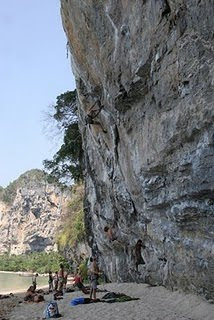 Krabi was my last stop in Thailand, and what better way to finish my time there then doing a bunch of climbing and a bit of diving.
Krabi is on the South West coast of Thailand's mainland. It is popular for it's excellent climbing as well as being a jumping off point for Koh Phi Phi.
I arrived in Krabi at about mid-afternoon and headed over to Tonsai beach to find Mark and Clare (2 English teachers based in Namhae Korea). They were on vacation for a couple of weeks and were spending the whole time in Krabi. It didn't take me long to find them as Tonsai is not the largest place. In fact there is no car road leading to Tonsai, so I had to Catch a long-tail boat around to it.
The first day/night was pretty chill. We just hung out, ate, drank and watched a guy fire dance on a slack-line. While we were watching the Slack-line fire dancer I happened to find Marko, the cool Croatian guy I had met in Laos. It was totally random to see him here, but I've had a lot of these random moments throughout my time in Asia. 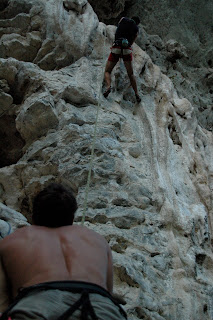 For the 2nd day we decided to do some climbing. On Tansai, everyone is climbing! That's pretty much what the beach is known for. And there are no shortage of places to climb there! There are a shortage of easy climbs though, so for the less experienced climbers; (myself) had to attempt difficult climbs or just sit round and watch the pros go.
Our first spot was quite nice, right on the sands of Tonsai where some of the climbs weren't too difficult. My lack of climbing (or hard labor for the matter) experience showed though. Not so much in my skill, but on my hands and in my arms. After only a couple climbs my fingers were quite torn apart and my arms were incredibly unhappy as I had just woken up muscles that had been sleeping for quite some time!
By the time we went to our 2nd spot in the afternoon, my body was pretty much done! It was good to watch the boys climb though. Marko is an exceptionally good climber and Mark is definitely more than decent as well. 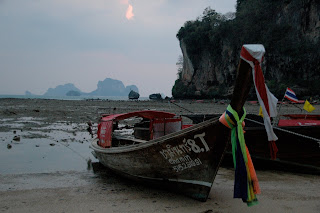 For my last day in Krabi we had arranged to do some diving over at Koh Phi Phi. I was quite excited about this, as I had heard that the diving over at Phi Phi was a lot better than that of Koh Tao.
The day was perfect for diving! Clear skies, 30 degrees, not much wind. Couldn't have been more ideal! Plus the boat we were on was quite nice too.
The trip out to Phi Phi took about 2 hours and when we got there we jumped off at Maya Bay for our first dive. The first dive was okay. We saw a cool turtle along with several interesting fish. but we weren't here to see fish! We want sharks damn it!
For the 2nd dive we moved to another spot where 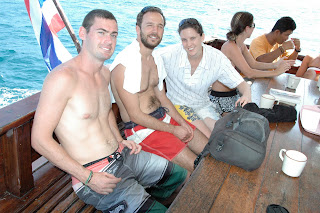 they had reportedly seen whale-sharks in recent days. We didn't see any of those boys, but we did happen to see a black tip, as well as a few leopard sharks. Plus we also saw a couple sea snakes and a trumpet fish. this was easily one of the coolest dives I've ever done, though all the excitement did see that I ran out of air much quicker than the previous dive.
Well the most exciting part of the day actually happened to be trip back to Krabi. We were about 30 minutes away from docking at the beach when the captain noticed some fins out in the ocean. He slowed down and followed them around for a while. At first we thought that maybe they were dolphins. Then we were thinking that maybe they were small sharks. They actually turned out to be huge whale-sharks! I'll never forget the moment where one of them came right up to the side of the boat. Everyone's reaction was the same! Loud gasps and complete shock... It was amazing! 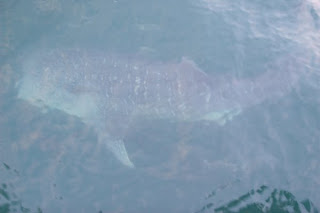 Everyone was buzzing all the way back to the beach too. No one could stop talking about what we had seen!
WHALE-SHARKS!!
Posted by clarkysk8 at 2:23 PM