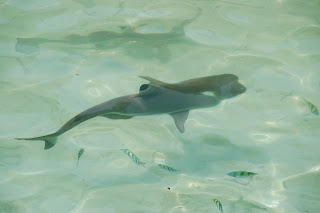 Once I hit Penang I realised that I was still craving a bit of sun and beach. So I backed tracked a little up the West coast to the Malaysian island of Langkawi. This involved a relatively quick ferry trip. But the day then involved a long stroll around town in hunt of a cheap place to stay. I met a Dutch guy on the ferry who joined me in the quest for budget accommodation. This turned out to be quite difficult in that Langkawi was actually a little more developed than more previous spots in Thailand. And there seemed to be a different market of travelers on the island - no longer the poor backpacker crowd, but the wealthier holiday getters. However, we did end up finding some cheapish accommodation and some other backpackers to hang out with. 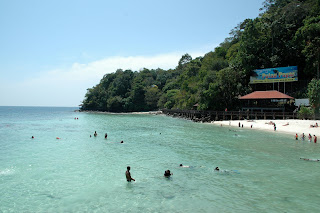 Langkawi's beaches are quite nice. Nice sand and warm water. Not too mention the weather was stellar! I spent a good deal of time relaxing and reading on one of these beaches and sometimes even a bit of sleeping.
Another great thing about Langkawi was that everything on the island was tax-free. Don't ask me why! This includes alcohol. Which is surprising because booze on the mainland is ridiculously expensive. So it was nice to be able to have a few drinks to ease the pain of paying for expensive accommodation.
On one of the days I decided to go do some diving. I boarded a boat full of people thinking that this was going to be a busy activity only to find out that all the people we 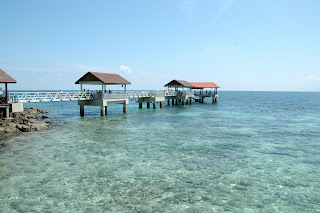 re actually going snorkeling and that I was the only one diving. I didn't mind this so much though as it is nice to go diving with few people. The diving however turned out to be a little lame compared to that of Thailand. We did see some large schools of snapper and a really strange Scorpion fish. The visibility was a pretty poor though, so a lot of the time was spent orientating myself and trying not to lose my instructor.
At night in Langkawi I hung out at a cool reggae bar that would constantly fill up with people. This place was chill and right on the beach, which was nice!
Posted by clarkysk8 at 10:20 PM