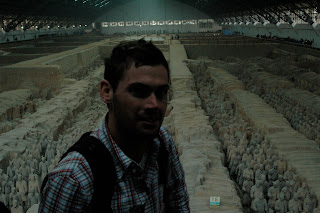 After a relatively easy (9 hours) train ride, I arrived in Xi’an and I went to my Hostel (Shuyuan), which a lot of people had spoken about in Pingyao. The hostel was really big and there were tons of travellers there. There is a nice café there as well as a huge bar downstairs in the basement.

I spent the first day just walking around the city inside the city walls. My first impression was that the city was a little polluted, and very big. Looking around the history was very evident and there are some impressive structures in the centre of town. When I got back to the hostel I met up with a couple that I was rooming with (Clare and Owen). Clare was from Melbourne and Owen was from London but they had both been living together in London for the past couples of years. They were both really cool and I ended up eating and drinking with them that night. We went to the bar downstairs, which was large, busy and very very smoky! We had a good time though, and we really didn’t spend too much money, which was nice.

The next day, I met up with Gerald and Anette again and we had breakfast together. They were leaving though and were heading to Chongqing, so I may not see them again. Also that morning I met up with Sarah again; she had just gotten the train in from Pingyao. Anyway, I ended up heading up the city walls with Clare, Owen, Sarah and an English guy called Dave. We rented bicycles and rode them all the way around the city walls (14km). It was a pretty cool experience, though it does get a little redundant after a while. I ended up saying goodbye to Clare and Owen, as they were leaving in the afternoon and Sarah, Dave and myself wandered around Xi’an for a bit. We headed over to the Muslim quarter in search of the Great Mosque, which was actually really hard to find! Eventually, we found it and we paid to go in. It was a little disappointing, but it was cool to see a Chinese style Mosque and it was also interesting to see Chinese Muslims hanging out and doing things that were not typically Chinese.

That night I met up with another Dutch couple (Dennis and Chantel) and Sarah and we hung out and had dinner and drank for a bit. The Dutch couple were incredibly funny and we spent most of the night laughter at their antics.

The next day we all went to see the ‘Army of Terracotta Soldiers.’ T 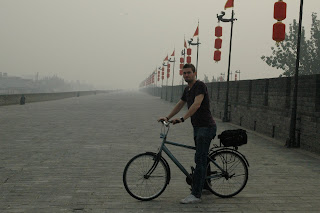 hey are located a little out of town, so we had to take a couple of buses to get there. Once we got there we organised a guide so that we could have someone explain everything and we wouldn’t be just looking around and potentially becoming unimpressed. The soldiers are really very impressive! They have excavating them for years and they are still doing so as well as piecing them all back together. I was a little annoyed at how the place seemed to be a very large shopping complex though. There were so many souvenir shops and they were scattered in and outside the complex and really could not be avoided. But if you come to Xi’an you really have to see the Warriors and I was very glad that I did it! Also, the Dutch couple again were very entertaining and gave us a bunch of laughs throughout the day.

That night we all ate and drank together again, but this night seemed to go on a lot longer than the others and some people drank a little too much. We all had a good time and we met up with some other fun travellers too, so it was a pretty good nigh!

On the last day in Xi’an everyone seemed to be a little hungover, so many people just stayed in the hostel. It was also raining very hard, so doing stuff outside was not exactly an appealing thought. Sarah and I did venture out however and we headed over to see a large Pagoda (Big Goose Pagoda) and we checked out a free museum (Shaanxi museum. The museum was boring though… So if anyone tells you it’s good, SLAP them in the face and say ‘Ian says you’re a liar!! . But we did have a pretty fun time walking around Xi’an outside the walls, even though it was raining for the most part.