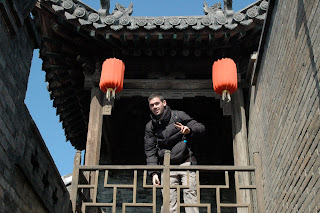 The train ride into Pingyao was relatively placid. I had a hard sleeper that was really nice and I slept nearly the entire way (8 hours). I was also in a berth right next to Gerard and Annette and we chatted a bit, which was nice.

We arrived in Pingyao at 6:30am and it was cold and dark, but there were little bike taxis waiting to take us to a hostel nearby. We all (Anton, Anna, Gerald, Annette and I) hopped in the taxis and went to ‘Harmony hostel’ which is the “our pick” in the Lonely planet. Driving into the city was quite cool. It was a very hazy and the sun was starting to rise. We drove up to the city and the first thing I noticed was the large and very impressive city walls! We drove through as if heading back in time and entered a city that looked as if it had been left the same for 500 years.

When we arrived at the hostel we discovered that it was not that busy and we all got our rooms upgraded. I had booked a dorm room for 25RMB a night and ended up getting a twin room by myself for the same price. Once I got into my room I immediately fell asleep again. I woke at about 10:30 and went out to explore the town. The town was really incredible! It really did look like it had been left untouched for 500 years! The only sour part was that the main streets were lined with tacky souvenir stores selling the same fake crap that you can find all over China. I walked around for a couple hours weaving in and 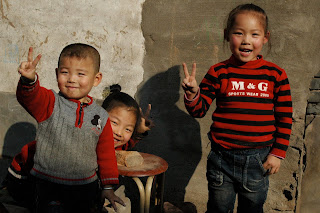 out of the Hutongs (alleys) and walked along side the city walls. Back at the hostel I met up with my friends again and we organised to do a tour together the next day to a near by village and an underground castle that was supposed to be quite cool! For the rest of the day we all just chilled, played cards and relaxed.

The next day a van came and picked us all up and took us to a nearby site called ‘Wang family courtyard.’ This “courthouse” was more like a massive city and neither one of us had read or even heard anything about the place. We were all really impressed however and we spent about 2 hours exploring this cool residence. After that we went to a nearby village that had a bunch of old temples and some other cool things. The coolest thing about the village though was a castle that was underneath it. The Zhangbi Cun is a series of really fascinating tunnels that are under the village that apparently go for about 10km (only 1.5 are opened to the public). But they don’t know how old these tunnels are as there is no real written record of them, but they do know that they are at least 2,000 years old. We really enjoyed exploring these tunnels and our guide was pretty interesting for the most part. 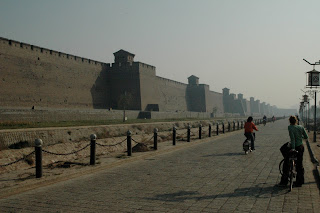 That night I had dinner with Gerald and Annette and we were pointing at the picture of dog on the menu board and I guess the waitress thought that we wanted that. So, we ended up getting some dog… oops!!

On my last day in Pingyao I met a Dutch girl named Sarah, who was really nice and her, the German couple and myself all rode bicycles out to a temple that was nearby. We also spent the day cycling around Pingyao, which I really enjoyed and overall I had a pretty good experience in Pingyao.