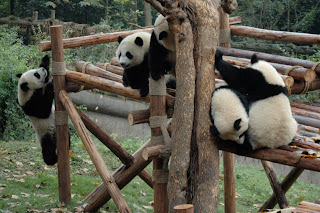 So, Chengdu has a reputation for being a very large but very relaxed city and I have to say that for the most part it has lived up to this reputation. I arrived here with Sarah, Dave, and a bunch of other backpackers after a 16hour train ride from Xi’an. The train wasn’t too bad though, as I pretty much slept for more than half of that time.

We arrived at ‘Sim’s Cozy Garden Hostel,’ which I might say… Is quite nice!! Very large, friendly staff and all the necessities one might need in a hostel. Didn’t seem like there was a lot of people staying there though, which was a surprise, because these “Lonely Planet our picks” tend to stay quite full for the most part. Anyway, didn’t really do much on the first day. Just took it easy and ate some Sichuan style food (which I found much better than the northern stuff).

The next day a bunch of us got up early and went and to the panda research centre to see the pandas. This is the best time to see them, as they are very active early in the morning and no just lying around sleeping. They were very active and a lot of fun! I got a lot of good pictures. I also met a man from Korea, who I practised my Korean with. It was really exciting for the both of us! My favourite part of the tour though was at the end there was a place where you could eat some panda and buy some genuine panda fur. Some people think this is very cruel but I think that this is just one of lives finer things! Don’t judge me!! I bet you eat meat and you wear leather… you do, don’t you! Cannibal!!

Anyway, I was totally joking about panda cruelty before… Though I have punch one or two in the face back in the day. But all jokes aside, Chengdu is a really relaxed city. Even though there are about 4.5 million people living there (and another “something something” million living on the outskirts) everyone just sits around drinking tea and taking it easy. So… “When in Chengdu…”

I’ve been pretty much just relaxing here. Spent a bit of time in teahouses, plus been cycling around town and trying not to get hit by cars and buses. There is a people’s park here that a bunch of us went to see and it was quite a site! People just hanging out, dancing, flying kites and drinking tea. It wasn’t all that big, but it was full of older Chinese people just doing their thing!

At night, the local ‘Sichuan’ speciality is ‘Hot Pot.’ And yes… it’s pretty much as the name suggests!! A big pot full of hot stuff! Its quite good though and I had it couple of times during my stay in Chengdu. The first time that I had it I didn’t realise that you were meant to put you meat in a “cool off” dish after taking it out of the pot. This dish has coriander, garlic and sesame oil in it and it’s used to flavour the meat after its been in the fiery pot. So… I took the meat out of the pot and put all of it into my gob. After this, my face resembled a similar colour to the broth in the pot and I literally could not speak. It was definitely an experience and every bite after that was somewhat tame.

On the 3rd day in Chengdu, some of us rented a driver to take us out to the Leshan Buddha, that was about 2 hours drive from where we were. The Buddha is really something impressive! It’s 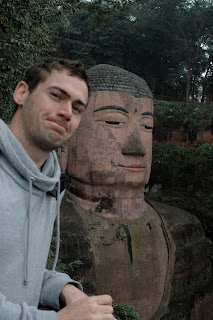 more than 70m tall and over a thousand years old. It has been carved out of the side of a large cliff and he is positioned in a straight-legged sitting position. The annoying thing about this trip was that we went on a Saturday and half of China came on a weekend trip. These tourists weren’t your regular city folk either. No! They were out-of-towners that were incredibly fascinated by foreigners/white people that don’t look like them. A bit of staring is fine… I’ve been living in Korea!! Those guys wouldn’t stare any more if I were naked. But these tourists would stare for minutes (with half minute intervals) and what made it worse was they were all armed with cameras! ARGHHH!!! Leave me alone!! They were not at all shy about sticking that camera in you face either. But luckily none of us were intimidated by this and we would stick our cameras right back in their face or just cover our face like we were criminals. I mean seriously… Why would they won’t to take pictures of foreigners? Are they going to get home and show their friends the pics? “Here is me standing at the entrance, here is the Buddha, and oh… Here are some white guys that I saw standing in a line, Aren’t they weird looking?!”

Anyway, apparently on the way home our taxi driver nearly fell asleep while driving. I say apparently because I too was asleep and I was in the front, so everyone blames my sombre state for his drowsiness. But we made it back safely and that night, Anton and Anna (the German Couple) checked into our hostel. This was totally by chance and it was cool to see them again. We all played Mah Jong and hung out for the evening and talked about what we’d been doing for the past week.