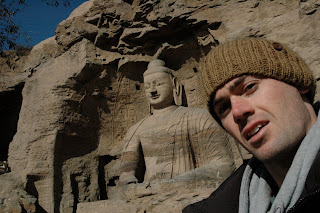 So, after the flight into Beijing I was feeling a little strange. I guess it was a mix of nerves and anxiety really, but I was also very sad to have left Gwangju and everything and everyone that I had become familiar with and become attached to. However I braved through the nervous and began the journey through China.

First, I hopped on to a train that took me to the main long distance train station. This train station (Beijing station) was absolute chaos! Tons of people everywhere just running around mad, so I felt a little nervous trying to order my first train ticket. Anyway, I sucked it up and headed to a random ticket window and tried my luck. The first angry ticket lady pointed me toward another window and then that angry ticket lady found my train but informed me that I had to go to another train station. Anyway, I headed to ANOTHER ticket window where that angry ticket lady sold me a ticket! After that I hopped into a taxi and went to the other crazy and big bus station (Beijing West). Eventually, I got onto a train headed for Datong. I had purchased a seat (rather than a sleeper) as it was much cheaper and the train ride was only about 6 hours long. The seat was quite uncomfortable, but bearable and the people around me seamed very curious about me being on the train. The trip was made all the more uncomfortable by the fact that I was sitting next to a couple of young Chinese guys who didn’t say a word the whole trip, they just sat there and stared without a word. But it was an experience and that’s what travelling is all about!

When I arrived in Datong my body went into a numb state of shock! It was freeeeeezzzzzzzzing! I walked straight to the nearest hotel and paid the stupid prize that they were asking. I kind of wished I had looked around a bit because other people mentioned cheaper places that they found right next to the station. But anyway, I had a nice shower and a good sleep and the next day I felt awake and ready to take on the city!

The main reason I came to Datong was to see the Yungang Grottoes, which are famous Buddhist carvings located in the mountains near Datong. My main objective for the day was to find a way of getting to these caves. This goal seemed to be harder than I thought! Firstly, I need to mention that the Chinese really like to burn coal (for heat, energy and maybe just for fun) and Datong is known for having many coal burning facilities right in town. And let me tell you… They did not disappoint!! The town seemed incredibly polluted by this crap and it also stunk like hell! So while holding my breath I wandered out of the hotel and found a bus to take me into town. The bus was so packed that it could hardly move under that weight of all the people, but it eventually got me into town. When I was in town I walked around looking for another bus but eventually gave up and got a good deal on a taxi to take me to the caves. 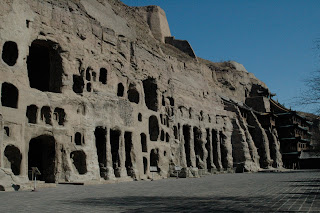 The caves were really cool! They are all about 1500 years old and they are still in immaculate condition. There are about 20 or so different caves and some are really mind blowing and others are quite simple, but none the less they are all nothing short of amazing! There are some huge carvings of Buddha that were incredible and there were some very fine carvings on the walls that had very good detail.

While at the caves I met a German couple named Anton and Anna, they had organised a taxi to pick them up from the caves and take them back to Datong. I managed to share the taxi with them and get back into to town. We all ended up having lunch together and while doing so we discovered that we were headed to the same destination that night on the same train. I ended up hanging out with these guys for a while and walked around the town with them for a bit.

That night I went to the train station and hung out and waited for my train. While I was there I met a Dutch couple (Gerard and Annette) that I mad bumped into previously when I was checking out of my hotel. They were very nice and they too were heading to the same place I was that night. The place we were all heading was called Pingyao, Which is an ancient city surrounded by city walls.