After Udaipur, I headed to Delhi. I’d been warned about Delhi by loads of people. Everyone says it is really chaotic and just absolutely mental! But none of these warnings could properly prepare me for what was really install. 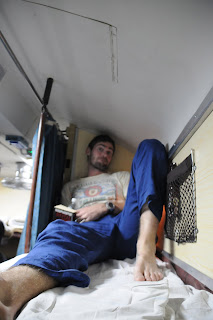 I arrived early in the morning and headed over to Parhaganj, which is a backpacking area near New Delhi Station. This place is crazy! So many people, so much poverty and a bunch of random tourist hotels thrown in-between the Chaos! The touts here are relentless too. Everyone seems to be just “heading your way” and states that they don’t won’t to sell you anything. 100% of them are FULL OF S#%T! I could not walk 5 metres without some smooth talking moron yelling at me or start following me. Getting to and from destinations was a hassle too. I was starting to lose my mind trying to get a decent auto-ric fair or even to get one of the douche-bags to turn on the meter!

Once I got to the sights however, I found them quite peaceful and a welcome break from the Delhi madness. The most notable places that I visited were the Lotus temple, humayun's tomb, and The Red Fort. 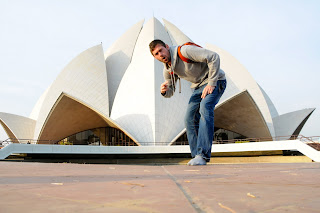 The Lotus Temple is a Bahai worshipping spot. Bahai is a small time religion that seems to acquire quite large facilities to worship in. The design of the temple is very similar to that of the Sydney Opera House (not as cool though, in my mind). The temple is in the shape of a lotus flower… Duh! I did enjoy walking around snapping shots of the place. Really cool! But I didn’t bother to venture inside.

After the “flower Tower,” I went over to Humayun’s tomb. People describe this place a “mini Taj Mahal,” but it is actually built 100 years before it. Also I feel the design and style of it is quite different and very unique. I did get there just before they were closing though, so I was forced to rush around the place a little quicker than I would’ve liked. 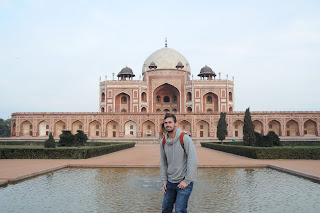 In the evening, I tried my best to avoid the town of Parhaganj and spent my time either in a restaurant or in my room. And that night turned out to be a rough one! The ol’ famous “Delhi-belly.” I was sick, cold and miserable. Tough times! I got through it and managed to sleep in a bit the next day, despite the loud noises coming from outside.

Finally after much delay, I bravely stepped outside and may my way over to The Red Fort. To be honest, the fort was nothing really spectacular. While over that way though I could see the Jama Masjid Mosque, which is the largest one in India.